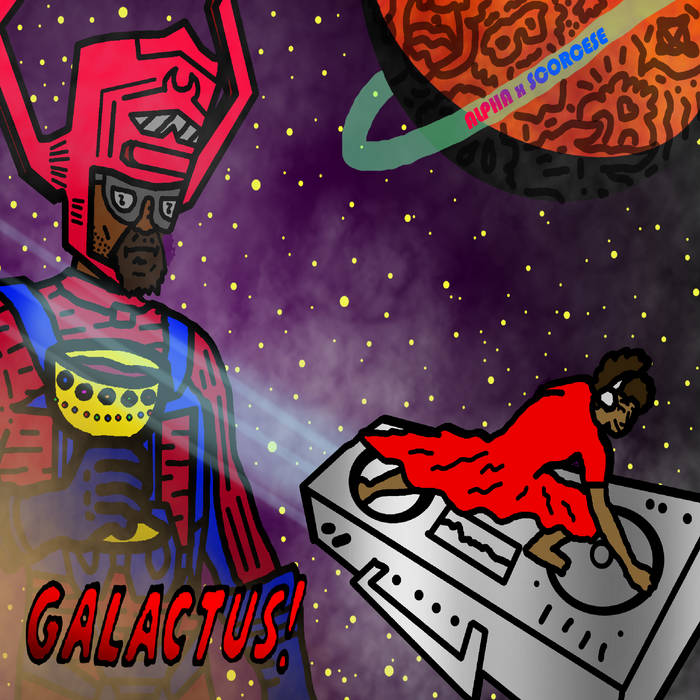 'Galactus' is the latest offering from "A World Only Gods Know", with a couple different views into the world Scorcese and Alpha have in store for you, 'Galactus' is a lyrical execution equivalent to taking the gloves off.

For an even deeper look into "A World Only Gods Know", visit www.godsknow.com and take in the out of this world visuals for 'Galactus'.

Raps by Scorcese.
Production by Alpha & Chris Wright (The Directors).

Doing the Dougie in Tune
To this Angel's groove
Dealt a dead man's hand
Can't salute in this saloon
Full of hot air
As your bullshit balloons
Cocooned by a smile
Barely concealing my rage
Serenades fall from Heaven's grace
It's a phase, two-stepping through the devil's cabaret
More school days, less School Daze…
If you get my meaning..
If not - sequence our rhythm til your girl swallows semen
I'm fucking around…
I got a couple questions… submit your answers
Never danced with the devil- So why you buying her drinks?
Why would a Sher Khan give a fuck what a Mufasa thinks?
You was Desert Storming, but never enlisted as a soldier?
Tasked with charming snakes… til you became COBRA?
Fucking Serpentor's…

I'm Galactus, eater of worlds covet ya earth
No Heralds involved strictly Harold's Chicken involved
10 minutes of sex three piece with mild sauce
A mild cost to treat ya ho's mouth to my mouthwash
Brush ya teeth with my unborns gone before the sun dawn
The hellspawn, Al Simmons in foul linens
The outer limits where my journey beginning
In the zone by my twilight silhouettes of hot dykes
Hot sex by the platter, tongue down her rabbit hole
Oh Lawd! I'm the Mad Hatter!
Grin so Cheshire, splurge on the Best Western
This our wonderland now take off ya Wonder Bra
You a House of Cards, but who Smokin Aces?
Titties trash but them yams taste like sweet potatoes
Am I wrong for whipping cream on the devil's pie
Life's a joke even Chappelle couldn't improvise
World in my palm, wrist so numb
Broad in my lap but I still don't come
Sarcasm, that's the armor of a scorned lover
Going out on my shield doing the Danny Glover
Stand before you naked, color blind and racist
Refuel my spaceship, Ronnie Fieg Asics
Beyond normal, seance with immortals
Blow dro, stronger than Kevin Sorbo
Vision Futurama, weed green like Morbo
Replaying Portal while i'm crushing Digiorno's
Laugh at jokes my damn grandpops whisper
Vivid snapshots, video vixen asshots
No love for the ratchets
Patches on my Member's Only jacket
Fashion wizards casting death on other spell casters
Avada Kedavra, three tacos carne asada
Thinking bout my start and I start to get nauseous
Fight to the finish I'ma finish regardless
Shooting for the stars dodging spaceships and comets
Life shit cloud my brain, but these horns so colonic
Convert life into phonics
Fornicating to the sounds of the Isleys
Just another love TKO! I ain't Teddy Pendergrass…
I'm Blade Brown he can be ya Duncan Pinderhughes
Win or lose I'ma move the way a sinner move
With the same moves a center do
I'm Pat Ewing when his knees still worked
With both eyes on the money like a Rothstein
With low self-esteem, but I elevate
Levitate, glide like a featherweight
I inseminate non-fertile grounds
Witness the birth of an evil seed
I'm Galactus

Excuse me… but I have a public service announcement to make
I...AM..Galactus
I'm the Eater of Worlds… I'm a Demigod
I'm a smooth, laid back motherfucker
The Type to steal your bitch…
And make you pay for the meal…
Ya'mean?
I know ya'll been riding with us… grooving
Understanding that this is a world.. That only a God knows
Oh! I'ma take a couple bars off… let Alph live
The incredible Alph Lauren ladies and gentleman
Scorcese Lorde Jones
Galactus
You got ya cups put em in the air…
You got your weed roll up…
You got a bad bitch… hit that shit one time
Cuz I'm….
Galactus...